BMesh is the overhaul of the mesh system within Blender that was first introduced to the software with version 2.63.  There is a host of features that have been added to the mesh system, mostly which center around the new NGON (polygons with verts greater than 4) capability.  The image below shows an example of an NGON extruded from the cube with 8 vertices.

This entry is based on a tutorial which can be found here: Blender Cookie Tutorial 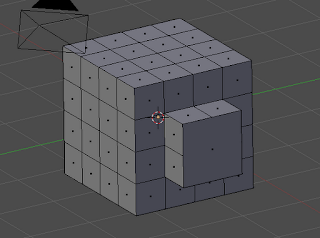 Next I'll walk through the main new features related to NGON manipulation. The first is 'filling' two vertices with an edge that splits the NGON.  This is done by selecting the vertices and hitting [J].  Hitting [F] instead will draw a line on top of the NGON instead of splitting it, which in almost all cases is undesirable.

Note that a ring loop of more than 4 vertices can be filled using [F] to create an NGON.

The next feature is the Merge or Dissolve feature.  This will essentially take the selected objects (verts, edges or faces) an dissolve them, but potentially to create an NGON.  The example below shows 4 faces being dissolved to make an NGON.  The dissolve can be performed in the delete menu [X].

Another feature in the delete menu [X] is the Edge Collapse.  This will take the selected edge(s), and collapse it's adjoining vertices to a central point.  This can be seen on a single edge in the image below.

The final delete capability is the Limited Dissolve.  Although it intuitively should be in the delete menu, I could only find it through the generic search [SPACEBAR] and typing in the name.  This basically deletes all the edges between the vertices.

The final new feature is the updated knife tool.  This can be initiated with the [K] key.  In this mode, the cursor marker becomes green, and you can essentially draw a path of cutting new geometry.  You must hit [ENTER] when the drawing is done to keep the drawn path.  This is probably the surgical method for subdividing NGONs since you can't use [w] subdivide across them.

The example below shows how drawing a path with the knife tool creates new face geometry.  Note one trick that if you hold [CTRL] while drawing, the marker will snap to vertices or the midpoint along an edge.

Final thoughts, NGONs are useful for making the workflow of mesh modeling easier, but for most cases with gaming or low-poly models, you'll want your entire model to be only quads (and possibly if absolutely necessary, triangles).

Another warning to note, NGONs behind the scenes may be made up of triangles.  You'll observe this if you try to subsurf an NGON.
Posted by Blakio at 11:09 PM