This entry covers loading video into the Video Editor in Blender.  This operation can be quite simple, but there is a catch if your video was not rendered at 24fps.

The first image is the Video Editing View, which is where all the video editing work will be done. 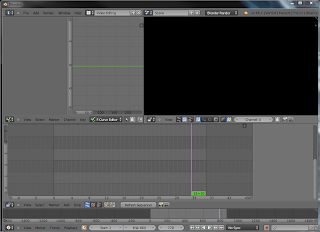 In the menu below the strips window, select Add > Movie.  Blender can read quite a few formats.  For this example I used an MP4. 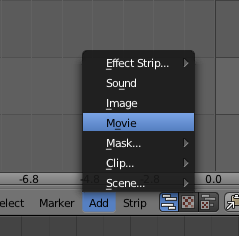 When the video came in, there are two strips represented.  The teal on top is the audio strip, and the dark-blue is the image strip.  Note that the image strip is longer than the sound (if you play your video you'll observe the disconnect).  The original video in this case was rendered at 30fps, but Blender will import each frame individually.  On the contrary, sound is time based so doesn't get scaled.  Since Blender defaults to 24fps, this is why the number of image frames is longer than sound frames.

To correct this, an  Effect Strip must be added to the video strip.  With the image(dark blue) strip selected, add [SHIFT+A] an Effect Strip > Speed Control. 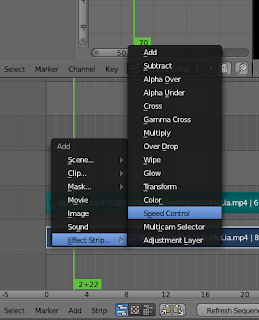 This adds a maroon bar in the next strip line.  Note also that in the properties panel there is now an Effect Strip section. In this section the Multiply Speed field will need to be modified.  The value is calculated as Rendered FPS / 24 FPS.  So in my case this was 30/24 = 1.25.  Now when the video is played, the visual render is matched up with the sound.

Remember, that the default frame bounds in Blender is 1-250.  If your video exceeds 250 frames, be sure to set the End frame appropriately so the whole video can be viewed.

Email ThisBlogThis!Share to TwitterShare to FacebookShare to Pinterest
Labels: Video